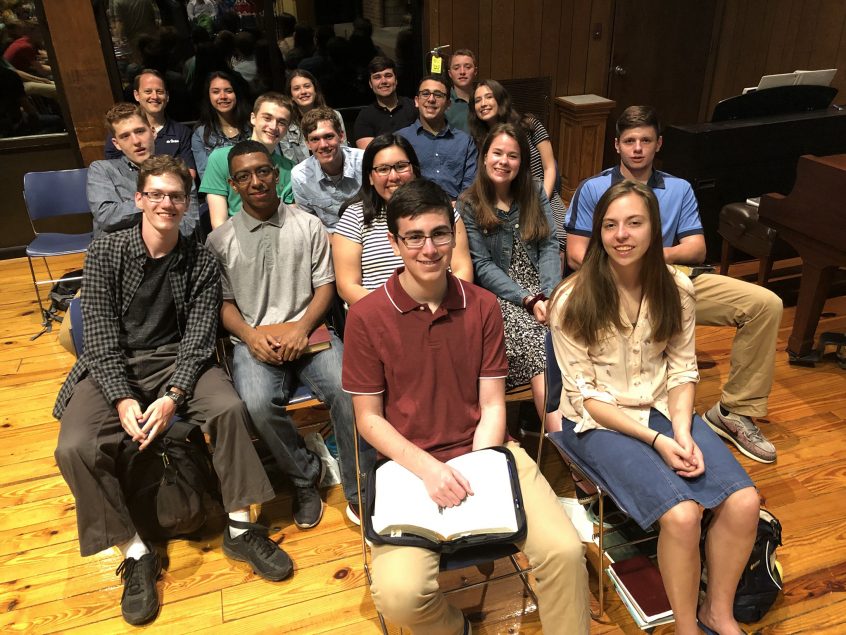 Monday evening, April 29, the seniors arrived at the Wilds Christian Camp for a fun-filled week of senior camp. There were games, great messages, and good food. Some highlights of the week included the Fourth Falls hike, white-water rafting, as well as the various zip lines.

The chapels and services were all led by the Wilds staff. Willie preached, as well as some other well-known faces, such as Chris Anastos.

The fun time was also hilarious. The staff performed a tongue-twister and several silent routines, as well as a “1 semester of Spanish love song,” and a knight-squire roasting match.

The seniors were asked what their favorite part or favorite memory was.

“The zip line was definitely my favorite part,” said Nathan H. “If I had the chance, I would have definitely gone several more times on the zip line.”

“One of my favorite memories was when a group of us were going tubing,” said Connor D. “When we reached the water wars area, there wasn’t anyone there, so we thought we were in the clear, until Jonathan, Nathan, and Tyler jumped us out of nowhere, spraying us till we were drenched. It was the best surprise attack I had ever walked into.”

“My favorite part about the Wilds was white water rafting,” said Evin G. “Going in I was really nervous, but when I got in the raft, it was not as bad.”

“My favorite part definitely had to be the land trolley and getting to meet and interact with new people and keeping in contact with them too!” said Jay M.

“I’ve got to say my favorite, but most challenging part, was Fourth Falls!” said Melanie T. “It was very hard and I did not want to do it, but everyone convinced me, and it ended up being really nice to see the falls! Overall, it was a great week!”

“Climbing Mount Everest (aka Fourth Falls) was my favorite part as well as jumping into the water when we got there,” said Stef M.

“The Wilds was amazing! I liked how there weren’t many other people there; it really opened up the camp,” said Caleb D. “You rarely had to wait for anything—like human foosball, gazeeball, tubing, etc.—because there were so few people to wait for in the first place.”

“I particularly enjoyed the things I’ve never done before at the Wilds, like the giant swing and the Zip,” continued Caleb. “Going over Third Falls is truly breathtaking. Other things like the summit and the Fourth Falls hike were a bit more challenging, but more rewarding, as we made new memories together as a class. Aside from getting our GoPro dropped in the lake, the rest of the week was full of laughs and challenges from the Word of God. I’m excited to go to the Wilds again this summer.”