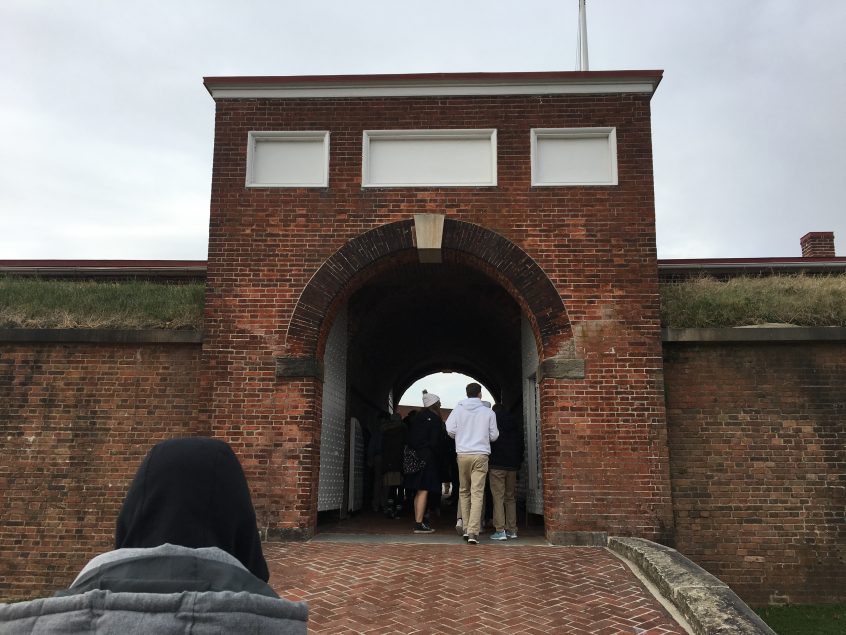 On Nov. 30, the U.S. History class traveled to Fort McHenry and Hampton for a field trip. The trip was organized by Mr. Armstrong, the class teacher and “tour guide,” with Mr. Van Den Berg as the bus driver. Instead of stopping by a museum, the students got to visit two historic sites located in Baltimore, Maryland.

“In the early-1800s Baltimore was one of the largest and wealthiest cities in the United States,” said Mr. Armstrong, U.S. History teacher. “This makes the city an ideal place to learn more about what American life was like after independence.”

Rarely have students had the opportunity to visit a historical site for a history class in recent times; the class was even able to participate in the flag raising at Fort McHenry. Jay M, senior, even got to pull the flag up to the top of the pole.

“I thought that was incredible,” said Jay, upon recollection of the flag raising. “I loved it a lot.”

Fort McHenry offered an experience that, in truth, is much different and definitely more eye opening than what can be obtained in a classroom setting. Students were given time to “explore” the fort and see what the site had to offer in the form of videos, memorials, relics, and info graphics. Each student was also given a set of questions about the fort and Hampton on a worksheet that they were expected to answer after or during the experience.

“I chose Fort McHenry because of the role it played during the War of 1812 and because of its influence on the writing of the Star-Spangled Banner,” said Mr. Armstrong. “It’s very special to see such an iconic site–and to be able to participate in the morning flag-raising is something that everyone should experience.”

“Fort McHenry had marvelous infrastructure that still could be used relatively well for a base today,” said Josh B, junior.

After buying a few curios in the gift shop, the educational trip continued to Hampton: a wealthy plantation owned by the Ridgely family in the 18th century. The national park service guided the students through many of the mansion’s spacious rooms, each depicting a slightly different time period from the last. The park ranger leading the students even told the stories of some of the many slaves that worked on the property.

“Hampton does a great job at showing how both free and enslaved Americans lived in the 18th century,” said Mr. Armstrong. “The main house was once the largest private home in the United States, but it also boasts some of the best-preserved slave quarters in the [country]. The Hampton provides a slightly different perspective on the plantation society.”

“My favorite part was probably when we got to go into the mansion and see all the stuff that they had in there,” said Estefania M, senior.  “It was mostly original pieces from the people that used to live there, so that was cool.”

After taking selfies and pictures in front and around the rest of the property, the students filed back onto the bus and talked all about what they had learned on the journey back home. Thank you to Mr. Armstrong for orchestrating the event and for being our history tour guide!

“This is probably one of the best [field trips] I’ve been to in a long time,” said Jay M.

“We live in an area that is rich in historic sites and museums,” said Mr. Armstrong. “To be honest, we could probably fill every day of the school year with a field trip!”

That would be epic.