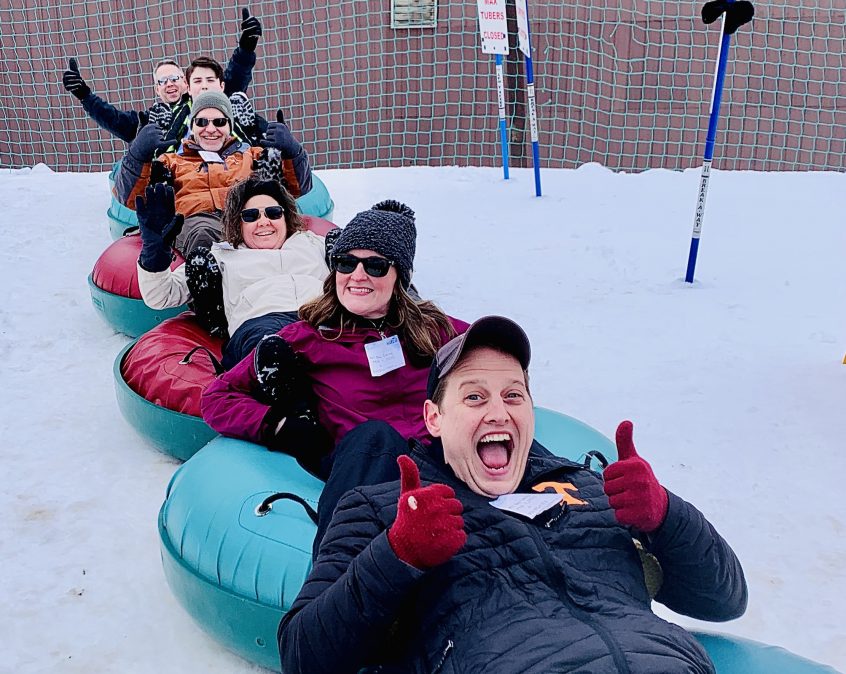 The FBT teens took a day trip to Roundtop Mountain Resort in Lewisberry, Penn., on Feb. 1, for a day of snow tubing. Bro. Kyle Spatz and Mrs. Marlie planned the activity with the assistance of Mr. and Mrs. Hernandez, Mr. and Mrs. Page, Mr. Donnelly, and Mrs. Jacques.

Although it was a two and a half hour bus ride to get to the resort, it was a nice chilly day around 30 degrees, and nearly 70 people signed up from 7th graders to seniors.

A “magic carpet” belt lift took the teens to the top of the hill where ten 800 foot long tubing lanes waited for them.

“My favorite part had to be going down in a group of eight people all linked together in a chain,” said Justin G, senior.

During the day, the Mountain View Lodge was open with a variety of food and drinks, and a place to warm up by the fireplaces and watch the other skiers on the mountain.

“It was lots of fun being able to hang out with friends and snow tube,” said Peter V, junior.

As they were loading the bus to return to church, the skies opened up and began to rain. The chaperons were thankful the weather held off until the trip home.

“It was a long bus ride, but it was really fun playing crazy eight along the way,” said Haston H, senior.

The trip was filled with fun adventures and great memories which were shared by all in the day.