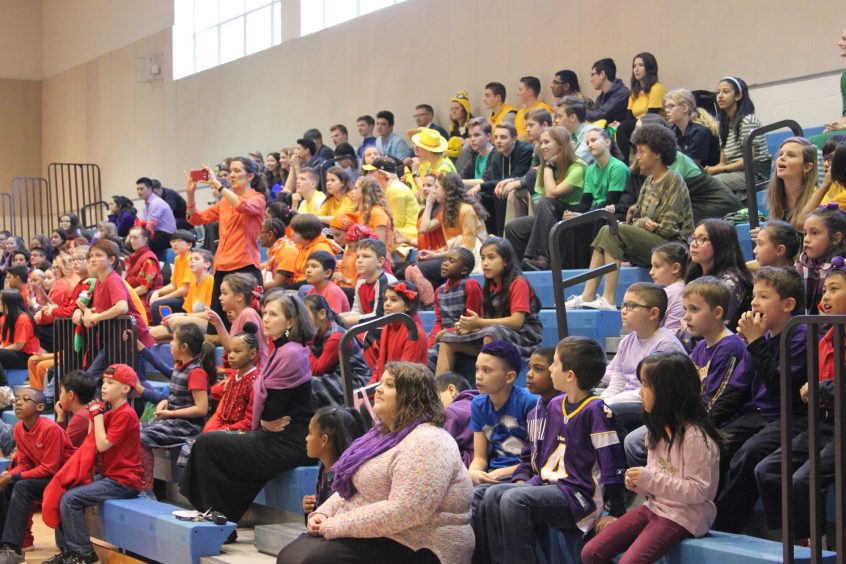 At the end of February, FBTA continued its annual tradition of spirit week to cheer on the final basketball games and to hold competitions for the best costume and school spirit.

Since Monday was a holiday, the first day of spirit week was Tuesday, Feb. 19. Fictional Character Day encouraged students to dress up as their favorite character from books, movies, video games, and other fictional media.

“My favorite idea was Fictional Character Day,” said Ethan C, sophomore, despite being sick for the actual day itself. “I was going to be Sherlock Holmes,” he said.

“I dressed up as Quicksilver from the X-Men,” said Caleb P, sophomore.

The winner for the senior high class for Fictional Character Day was Amy F, freshman, who dressed up as the dentist girl Darla from Finding Nemo; Virginia T,  3rd grade, won for the elementary as Nancy Drew; and Arya B, K4, won for preschool as Rey from Star Wars.

The next day was going to be Cozy Day, but a heavy snowfall and ice the evening before canceled school, which made quite a fitting “Cozy Day.”

“I enjoyed the day off, because, as Mr. Bradford said, ‘A snow day is just one, big cozy day,’” said Ethan.

Students dressed for their respective class colors for Color Day on Thursday. The colors for each class were decided by drawing a random color the week before in chapel. Simple colors like blue and red were mixed in with more vibrant colors like orange and purple. The senior class, drawing yellow, took first place for the day, stringing yellow caution tape across the gym as they cheered during the pep rally.

Junior and senior high also played the number game on Thursday, which consisted of searching for hidden numbers on post-its around the school. Not knowing what the numbers stood for was the risk students took when they turned them in.

At the pep rally at the end of the day, each number was explained. Some students had to sing “You are my Sunshine,” some had basketball competitions, some had to clean the lunchroom or the gym, and some got to deliver a pie in the face to the most unlucky number holder.

The last day of spirit week was Zoo Day, which opened up the opportunity to dress up as anything found at a zoo. Animals, tourists, as well as a number of inanimate objects were all fair game. Nyla W, 2nd grade, won as a giraffe in the lower elementary category; Natalie B, 4th grade, won for the upper elementary as a jellyfish; and Andrew C, sophomore, won the day for junior and senior high dressed as a popcorn bag.

After totaling all of the points gained by each class over the entire week, the senior class won first place in the junior/senior high category, just in front of the sophomore class, who placed second.

Spirit week has always been a great opportunity to show school spirit and has been a highlight of the school year along with the Patriot Pace. Every year is a slightly different week to keep spirit week fresh, inventing new days while bringing back older favorites.

The final days are decided by the student council, which discuss proposed days at length and then decide the order for the week itself.

Student Body Treasurer, Caleb D, senior, introduced a suggestion box that students could fill with spirit day suggestions to be discussed by the student council.

A majority of suggestions for this spirit week asked for Cozy Day, which, ironically, was the one day that was snowed out.