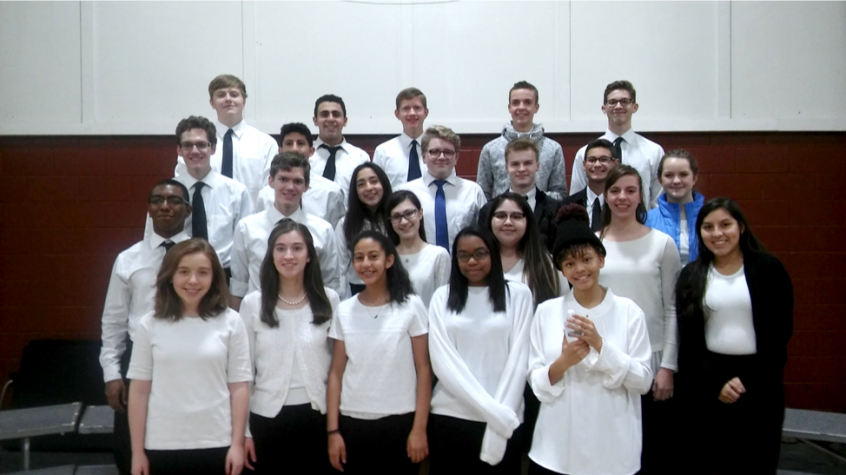 Due to a snow day on Thursday, Nov. 15, the 2018 ODACS Band and Choir Festival was delayed for FBTA participants. The next day, however, everyone got up bright and early in order to get to school and then to the band festival down in Richmond, VA.

The students could participate in one of three areas: (1) a concert band, directed by Mr. Ron Fox from Faith Baptist Church and School, Fredericksburg, VA; (2) a symphonic band, directed by Dr. Rick Townsend, from Maranatha Baptist University, Wisconsin; (3) and a festival choir, directed by Dr. Cleusia Goncalves, from Pensacola Christian College.

“It was really cool to be able to sing with people from other schools for a concert, rather than against each other in an ODACS competition, for once,” said Connor D, senior. “It was a lot of fun, and I was glad to be a part of it.”

“I have always loved the Band Festival!” said Haston H, junior. “It’s so much fun and quality time with your friends, so I was very sad to hear the first day was canceled, because the hotel is where so many great memories are made with your friends! Overall, it was still a great Band and Choir Festival! The symphonic band played many different selections that were thoughtfully chosen by our band director. Plus the choir sounded so good this year! This Band and Choir Festival was a smashing success even through all of the setbacks and delays.”

When asked what the favorite choir song was, “I Am Not My Own” seemed to be the general consensus.

“I loved having the opportunity to go,” said Caleb D, senior. “It was fun to re-learn old favorites like ‘I Am Not My Own,’ and ‘In the Beginning was the Word’ with a bunch of other people that were passionate about learning music. I learned a whole lot.”

When asked about how they felt about the snow day and missed band festival day, the main response was of disappointment.

“I would have gotten more time to maybe hangout with someone I met there and make even more friends,” replied Jay M, senior.

“I was really looking forward to sleeping over in the hotel,” said Amy F, freshman.

“I was kind of disappointed, but it did make things easier when we didn’t have to get up early at the hotel and then leave,” said Kylen W, freshman.

“I was a little disappointed that we didn’t get to go the first day because I wanted to hang out with everyone at the hotel. That’s okay though, because I still had a great time on Friday,” said Alyssa R, junior.

Students Ava J, Emma V, Julia W, Kylen W, Charity B, Jinnea B, Alyssa R, Andrew C, Caleb D, and Connor D were in the festival choir. They sang “Psalm 150,” by Peter Anglea; “Festival Sanctus,” by John Leavitt; “I Am Not My Own,” by Craig Courtney; “The Word Was God,” by Rosephanye Powell; “Prayer to Jehovah,” by Molly Ijames; and “God is Our Refuge,” by Allen Pote.

Students Savannah V, Lauren M, Hart Z, Josh B, Daniel P, Aaron M, Peter V, Haston H, and John F made up the Symphonic band. They played “Flourish for Wind Band,” by Ralph Vaughan Williams; “Salvation is Created,” by Tschesnokoff; “First Suit in E flat for Military Band—Chaconne and March,” by Gustav Holst; and “Prellude on A Hymn of Praise,” by James Curnow.