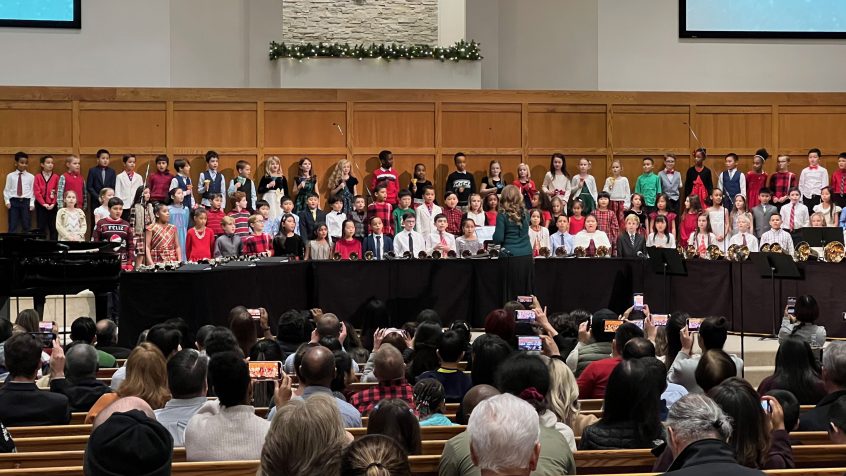 Led by Mrs. Probus, the Christmas concert’s theme was Being led to Bethlehem and Called to Christ. Preschool, elementary, and Jr./Sr. High were combined in one concert rather than performing in two separate concerts, a different aspect than what was done in past years.

“We knew the separate concerts would be considerably shorter because the band program is not running right now,” said Mrs. Probus, music teacher. “Therefore, I thought it might be nice to make it just one concert this year. I was excited to have the senior high join the elementary choir for the finale, ‘When Love Was Born’.”

“Being able to see the preschoolers perform was my favorite part because they are always adorable,” said Emilie Grindle, freshman.

Due to both groups of students performing in one concert, the auditorium was filled with parents ready to see their children on stage, having their phones out and raised high to record their kids singing. Some even walked to the front of the auditorium to capture that perfect moment of holiday cheer. Students waiting for their time to sing were placed in the junior and senior high classrooms.

“We were told by Mr. Armstrong that the whole choir was about to go on, but it was chaotic because some of us didn’t remember how to line up for our performance, and Mr. Armstrong didn’t know. So it was really funny,” said Emilie Grindle, freshman.

Preparation for the concert was important to students who knew they were performing, so  practice during choir classes and choral group was taken seriously.

“Overall, I believe we had enough time to prepare with most groups,” said Mrs. Probus. “The only grouping that could have used more time would have been senior high. Most weeks we were only able to meet once. In the weeks leading up to the concert, many were sick and out of choir as well. In the end, it all worked out, and the concert ended up being a highlight of the season.”

Much of these new handbells and chimes used were provided for through the Patriot Pace funds raised by students.

The senior high handbell group, led by Mr. Probus, also performed some traditional Christmas songs in a new way, like “Joy to the World.”

“The song itself is full of dynamic changes and it is a lot of fun, especially with the energetic parts,” said Carol Fahmy, junior.

“My favorite part of the concert was getting to hang out with my friends during intermission and seeing the other performances,” said Malat Michael, junior.

The concert ended on a heartwarming scene of both elementary and senior high singing the finale, “When Love Was Born.” With senior high on the stage and elementary students gathered all around the auditorium with their Christmas-colored lights, the finale was fantastic.

The Christmas concert gives students the opportunity to display their God-given talents to glorify Him and share the good news of the Gospel.

Thank you to Mr. and Mrs. Probus, Mrs. Lyle, Mrs. Smith, and Ms. Racinos for all your hard work in making the concert a success!