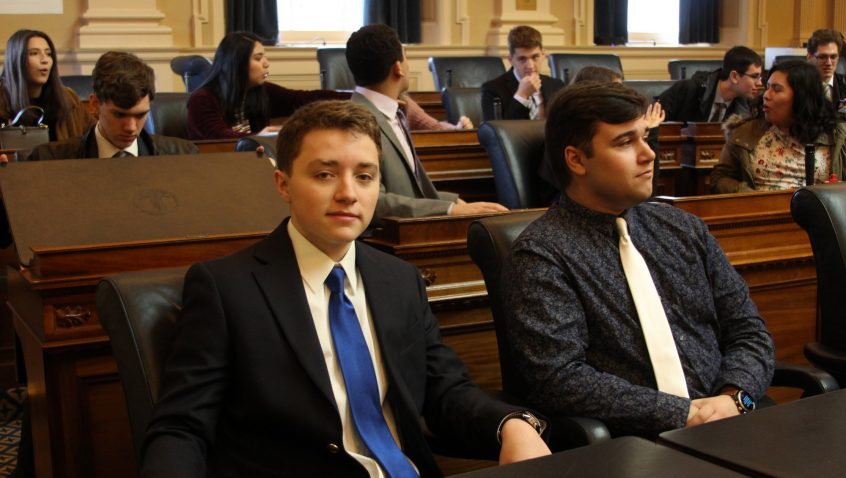 ODACS Senior Government day is when all the regional ODACS schools head down to the State Capitol in Richmond, VA, for a day to learn about the workings of the state government.

At 6:30 a.m., the senior class showed up at FBTA, still tired, but also excited for the coming day. Members of the class piled into the school bus, eating cronuts and coffee, while Mr. Bradford drove them to Richmond and their intended destination: the State Capitol.

The senior class was joined by senior classes from several other ODACS schools, and they went as a group to the chamber where the state House of Representatives meets. The House majority leader spoke about how the legal process at the State Capitol works. The students sat in the seats of the Representatives and were able to use the call buttons and desk microphones when asked questions by the House majority leader.

After that, the class took a tour of the building, and got to learn about the history of the house and the legal system there, and later, sat in on part of a meeting of the House.

Several members of the senior class commented on how the House procedures dragged on for a seemingly unnecessary length of time, just taking care of things like acknowledging members in the gallery who were visiting before they could actually get down to business.

The members of the Virginia House of Representatives have regular jobs all over the state and only come together for a few months of the year. Observing the session first-hand gave the seniors a greater appreciation for the patience and tolerance representatives must have to handle the many items on the agenda.

“One thing I learned from this trip is that I don’t think I could ever be in government,” commented Jonathan B, senior.

After a quick lunch at a local Subway, the class stopped off at a skyrise overlook of the city, took some pictures, and practiced singing the national anthem on the observation deck.

“I enjoyed the trip, although it was a long drive,” remarked Julie U, senior.

“Mr. Armstrong pointed out so many interesting sites in the Richmond area,” said Mrs. Dyck, senior mom who attended. “It was like talking to a walking encyclopedia the whole time.”

Learning about the government is very important, especially for seniors, who will be voting soon.

“I learned a lot from this experience, and I am glad I had the opportunity to visit our local government,” said Hart Z, senior.

Getting to see government up close and personal has given the class a new appreciation for the men and women who run our government, and has helped them to make informed decisions on government and voting.