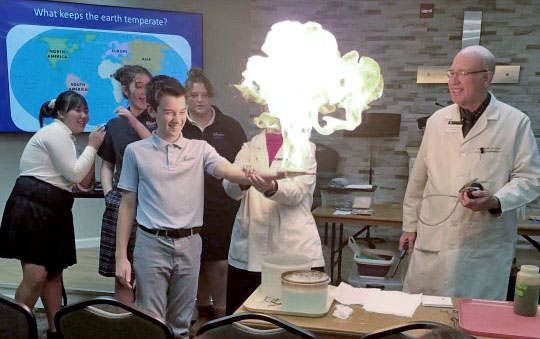 On Nov. 7-9, students had a chance to see science in an interactive way. The Matzkos, a science-loving husband and wife team, traveled to FBTA to display the power of God in science.

Setting hands on fire wasn’t the only eye-catching surprise these two science ambassadors did.  For each of the classes, they gave a science presentation with a variety of science tricks. The Matzkos taught about how each of these science demonstrations revealed something about the creative design of God in nature.

“I learned more about global warming,” said Mr. Niggl, science teacher, “I also learned how impossible it is for people to survive in space long-term because the earth is the only place well-suited enough for growing crops and sustaining life.”

The huge effort of hosting the AACS teacher convention for over 500 people came with its blessings. One of those blessings was the Matzkos arriving early to share the excitement of science with the church and school.

“The Matzkos were already coming for the teacher convention, and we worked it out for them to give their talk in school and church,” said Mr. Bradford, principal.

A former science professor at Bob Jones University, Dr. Matzko retired in 2018 to travel the country speaking in churches and schools on science and Scripture. His wife, also a former teacher, accompanies him.

The Matzkos began their tour on Sunday morning by setting Pastor Abbey’s hand on fire. That evening, Dr. Matzko spoke in church about the “moon: a signpost from God.” Throughout the next three days, Dr. and Mrs. Matzko talked with each of the FBTA classes.  Their visit was an opportunity to learn facts about science through experiments and see how science points to spiritual truth.

As Dr. Matzko states, “It’s not science vs. Scripture, but science in Scripture that glorifies our Lord Jesus Christ and honors Him as the Creator.”