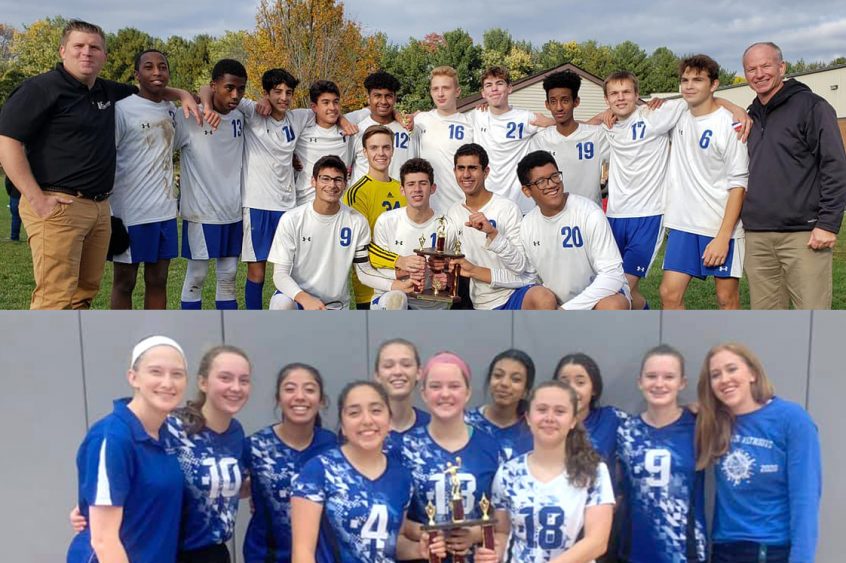 For the first time in recorded history, Fairfax won both volleyball and soccer tournaments in the ODACS final championship games.

“It was completely unexpected since we had lost to Valley’s soccer team and Faith’s volleyball team during the regular season,” said Mr. Bradford, soccer coach. “But they all fought hard until the very end. I am very proud of them.”

After tying the soccer game 1-1, Fairfax and Heritage went into two 5-minute overtimes, a 5-minute sudden death overtime, followed by 5 penalty kicks each, after which the teams were still tied with 4 PKs each.

During the sudden death penalty kicks, Colin, sophomore, drove home another Fairfax goal, while senior Fairfax goalie, Peter, stopped the attempt by Heritage, which ended the game with a victory for Fairfax.

“That’s absolutely the most pressure I have ever had in a game,” said goalie Peter, senior. “I knew if I blocked the last PK, it could be all over. The feeling of relief afterward was unbelievable.”

“When Peter stopped that goal, the crowd exploded,” said Mrs. Spatz, academy secretary. “We were so happy for them to have this win for their senior year.”

Fairfax had lost to Heritage early in the season, but had come back to win against them 3-1 in late September. Defeating them in the tournament was a dream come true for the graduating seniors.

“That was the longest game I have ever played, mentally and physically,” said Holden, senior. “It was totally worth it, though. I don’t regret anything from the season.”

“I think it was the most emotional game I’ve ever been in,” said Carson, senior. “Both teams were fairly evenly matched, and it could have gone either way.”

Four players were named to the all tournament team: Peter and Andrew, seniors; David, junior; and Colin, sophomore. Colin was named tournament MVP.

After losing or tying with Valley several times throughout the regular season, Fairfax was the underdog, seeded at #3 going into the tournament and set to play Valley in the semi-finals. Fairfax defeated Valley 4-1, advancing to the final championship to play #1 seeded Heritage.

The tournament was not statewide this year because of the COVID-19 challenges. Special rules and procedures were adopted to limit overnight accommodations and traveling, with the ODACS coaches voting to hold two regional tournaments for 2020 fall sports: the East-Central Region and the North-Valley Region.

In the East-Central Region, Tabernacle defeated Bethel in the title game.

In a championship “double-header,” the Fairfax volleyball team defeated Valley in three very close sets, 25-23, 25-23, 25-19 in the semifinal round on Friday. The following day, Fairfax matched up against Faith, a team Fairfax had just lost against in three sets. This time, Fairfax defeated Faith in three sets 25-15, 25-17, 25-18, to win the North-Valley Region championship. On the other side of Virginia, Bethel topped Centerville to win the East-Central Region title.

“The girls were on their game the entire day,” said Mrs. Spatz. “They were making almost impossible shots.”

Ashley, senior, served the game point that cinched the victory.

“I cheered, screamed, and cried until I lost my voice . . . but it was so worth it!” said Mrs. Tripp, senior mom. “These are the days we will talk about and remember.”

Ashley and Savannah, seniors, and Charity, junior, were named to the all tournament team. Ashley was named MVP.

Parents are so grateful that ODACS decided to go ahead with fall sports this year, even though there were changes made to help protect our students and coaches.

“We feel so blessed these girls were able to play a wonderful volleyball season,” said Mrs. Bradford, student mom.