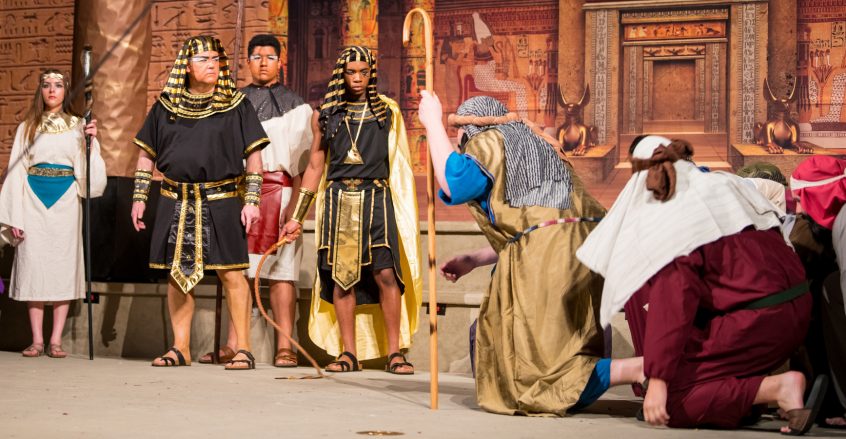 Genesis 50:20 says, “But as for you, ye thought evil against me; but God meant it unto good, to bring to pass, as it is this day, to save much people alive.”

This verse, taken from the life of Joseph, was the central theme of the play. Pastor Abbey made it his mission to help produce the play, but most importantly, to help students see God’s sovereignty in Joseph’s life, that they could apply it to their own.

Pastor devoted every Monday chapel message leading up to the play, walking through the pain and bitterness that plagued Joseph’s family and how it affected his life, but how it ultimately brought all glory to God.

Joseph did not grow up in the ideal situation. He had eleven other brothers, each born from one of Jacob’s four wives. There was a lot of jealousy and competition in the family for Jacob’s attention. This jealousy turned to bitterness and hatred, which led to Joseph being sold into slavery.

We, students, were reminded that our sins not only create a breach in our relationship with God, but they also affect the people around us. It is important to make Godly decisions, especially about our future wives and husbands. Children will have to deal with the consequences, negative or positive, that their parents have made. Children also watch very closely how their parents act, and will often emulate their parents’ actions. Jacob’s wives behavior among each other was latter reciprocated with their children.

Pastor then walked through Joseph’s transition from Hebrew lad to Egyptian servant. Joseph was sold to Potiphar, Captain of Pharaoh’s guard. By God’s sovereignty and grace, Joseph was able to develop a trustworthy connection with Potiphar. He was able to share the gift of interpreting dreams that God gave him, which helped to save Egypt and surrounding areas from a famine. Joseph was then appointed to the highest position under Pharaoh and lived a truly blessed life.

We learned that the key to Joseph’s success was his sole reliance on God. Joseph had every right to be bitter, angry, and to forget about God. But Joseph had a Godly response despite the horrible circumstances and brought much glory to God.

If we, no matter the circumstances, seek God’s guidance and trust in Him, He is sure to see us though until the end.