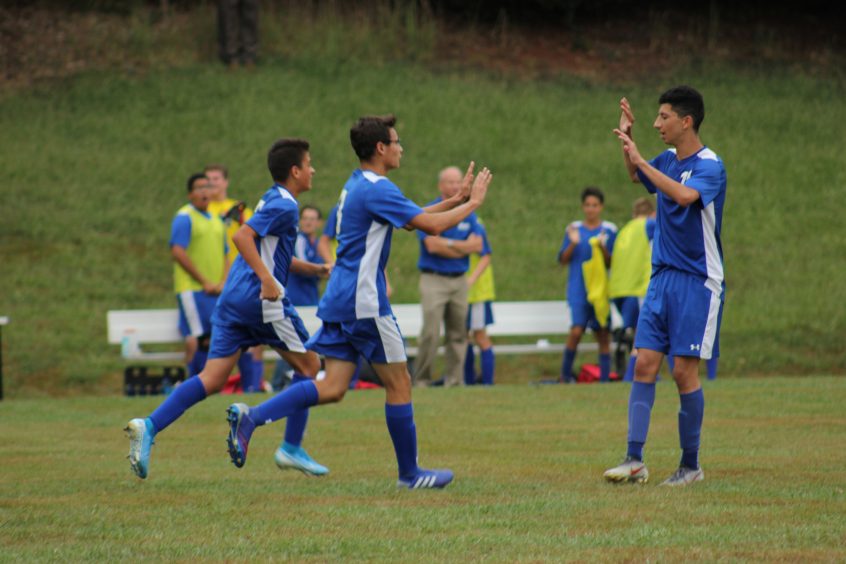 For the first time in seven years, the FBTA guys’ soccer team achieved victory against a rival team who hadn’t lost for their past 53 games. Fairfax beat Heritage 1-0 in a hard-fought boys’ soccer game on Friday, Sept. 13.

The Fairfax guys’ soccer team has been practicing with all of their energy for what could possibly be the best season that they have had in years. Practices began a week before school and continued nearly every day since without complaint, despite the downpours and heat waves of August and September. A passion for soccer and the hunger to defeat their opponents greatly outweighed the team’s temptation to become lazy or sloppy during practice. Led by Mr. Bradford and team captains Daniel P, John F, Jameson R, and Justin G, they have encouraged each other to keep pushing and to keep improving.

The game against Heritage was exciting, aggressive, and very intense. Fans shouted and cheered, referees did their best to keep up with all of the movement on the field, and players pushed their limits both on the field and with each other. By the end of the first half, Fairfax was ahead 1-0, following a beautiful goal by Andrew C, junior, off of a corner kick, much to the excitement of the Fairfax fans and players.

“I just can’t believe he scored,” said Mrs. Castilla, orchestra director and soccer mom. “I am so proud of him and the team.”

With the intensity increasing in the second half, several of our senior offensive players were hurt, and the strategy became keeping our goal safe throughout the rest of the game. When that final triple whistle blew, Fairfax had held their own and won against Heritage for the first time in seven years.

Congratulations from teachers and alumni poured in through social media and texts.

“I am just glad that I was able to be a part of such an outstanding victory for our team and our school,” said Jameson R, senior.

“[Mr. Bradford said] that he was so proud of the work of the team and what they have accomplished this season,” said Mrs. Bradford, K4 teacher.

The soccer team began the season playing a scrimmage against FBTA alumni as a warm-up to help determine what skills they needed to improve. Unfortunately, the school’s team lost, but the scrimmage was instrumental in the team’s growth, as they learned tips, tricks, and lessons from the more advanced alumni.

The team had several other noteworthy victories this season including a 6-1 win against Evangel, another strong rival team.

“I don’t believe that we have had that great of a win against Evangel since I was in the 6th grade,” said John F, senior.

The team remained undefeated until their second faceoff with Heritage, where they lost 3-1. With two homes games, a church revival each night early in the week, and lots of homework, it was a stressful week for everyone.

“I have so much work to do, and so little time to do it,” said Peter V, junior.

“I don’t think that I have ever been so stressed,” said Isaiah J, 8th grade.

Although the struggle was real, the team made it through the week, tying their game against Valley, going to church, and staying focused in school.

“The wise man would put the game secondary to school, because the outcome of this game will not get us into college,” said Christian L, senior.

Coach Bradford pushes the team constantly to never get comfortable and to always remain humble. Often their biggest rival is themselves, losing the game in their minds and getting in their own way. Remaining in control and keeping their goals in the forefront will help them stay focused and win.