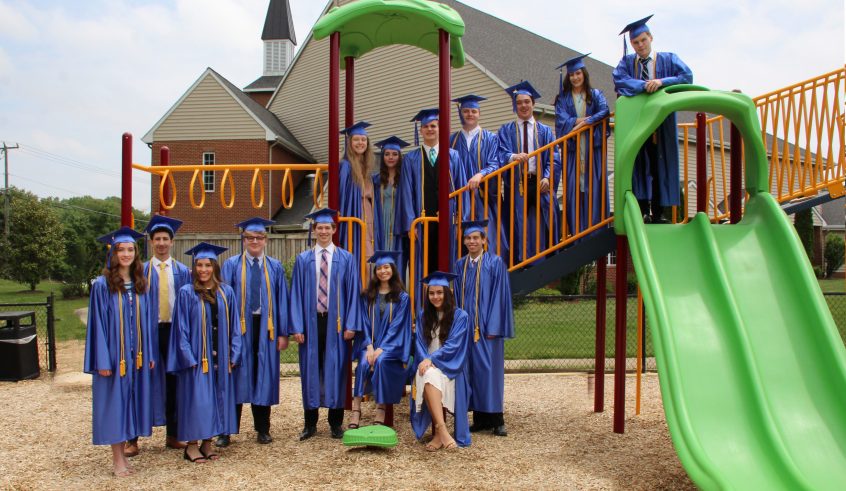 The virus pandemic this past spring threw the entire academic schedule completely out of phase for the final three months of the prior school year.

On the afternoon of March 13, rumors began flying that Fairfax schools would be closing for two weeks in order to plan how to handle the novel coronavirus. Two weeks dragged into a month, then the rest of the school year, and even through the summer. No one anticipated how much it would change all of our lives.

That final afternoon, the senior class took pictures on the new playground, although they almost rescheduled the photo shoot because some class members were absent that day. They were all very glad afterward that they didn’t skip it, as it ended up being one the last times they would see each other until their graduation photo shoot several months later.

After many challenging months of distance learning, and the cancellation of most extra activities, the seniors were able to go on a two-day “senior trip” which included hiking in Front Royal and whitewater rafting on the Potomac River in Harpers Ferry. The weather was extremely hot, which made activities on the river the more popular event.

FBTA was finally able to hold graduation on June 28. The graduates were “socially-distanced” on the platform, and Pastor Abbey gave the commencement address. The ceremony included a video of the senior class throughout their growing up years, as well as photos from the current year. It brought back a lot of memories from before the virus.

The reception that was planned for outdoors was relocated into the building after the forecast called for rain. Tables were spread out along the hallways to give the graduates a chance to set up a display and greet family and friends who attended.

The following day, FBT held the senior banquet in the Family Life Center, and juniors and seniors dressed up in their finest to celebrate the end of the school year. They were treated to another senior video (organized by Andrew, now a senior), a creative drink station, and a photo booth to help them make even more memories.

With normal school year activities extended so far into the summer, the Patriot Press wanted to cover the events that were missed due to the lockdowns. Even though the previous year seemed to drag on forever, the staff and students are eager to begin making new memories this year.

In order to comply with CDC guidelines on restricting groups to no more than ten, the seniors were photographed in two groups of seven and eight. Using the magic of Photoshop, the Patriot Press was able to get a complete class picture on the new playground.