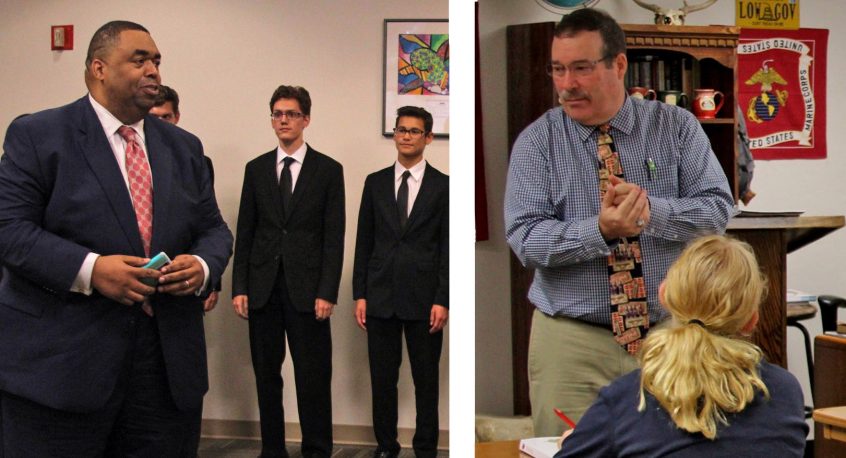 Students at FBTA generally love and adore the teachers; however, there is much that we don’t know about them. Mr. Niggl, science teacher, and Pastor Baldwin, choir director, recently shared a very important part of their lives with The Patriot Press: their testimonies.

Mr. Niggl came to know the Lord at the young age of seven. He was at a church camp in July, 1968, and the speaker was an evangelist named Don Wilson.

“I don’t remember which night of the week it was, but I realized I was a sinner and needed Christ,” said Mr. Niggl.

Mrs. Garmen, the pastor’s wife, led him to the Lord, and a couple of weeks later he was baptized in church.

Mr. Niggl also shared that when he was a junior in high school, Mr. Kelly, his high school principal and math teacher, saw his scores on a science test and suggested that he should be a teacher. He prayed about it and God led him into secondary education at PCC in the fall of 1979.

“Mr. Niggl is such an inspirational person. Anyone could tell he is so strong in his relationship with God, especially when hard times come,” said Amy F, freshman.

Pastor Baldwin was saved in 1976 at FBT. He would ride the bus, but later started coming to church with his mother. One Sunday he accepted Christ as his Savior in junior church. Later that year, he got assurance of his salvation after talking with his father.

When he was nine years old, he felt God calling him to be in the ministry. He started playing the piano at 15 years old, and his father asked him to lead the choir with only 12 people in their church.

“I was the youngest and the director!” said Pastor Baldwin.

Next year will be 35 years since the choir was started.

God has used both of these men to impact many people and students over the years. The students at FBTA are so grateful that they answered God’s call and have given their time to help with their education.

“He is probably single-handedly the best choir director I’ve ever had,” said Jay M, senior. “He knows his music very well and seeks to bring out the best in us.”